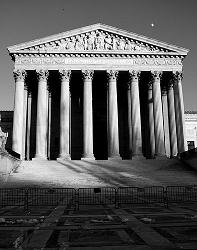 A blue wave. Democrats win the House, the Senate, and the Presidency. The result is not in doubt on election night. Except by those who have been sowing doubt for the last four years. Biden will declare victory, Trump will not concede.

Trump will figure out which key states he needs to “swing” after the election. He will contest the vote in those states, taking his complaint to court. Likely states include Florida, Pennsylvania, and Wisconsin. All state supreme courts will eventually rule against Trump.

The Electoral College will vote to confirm Biden as president-elect.

Trump will appeal the state supreme court decisions to the United States Supreme Court, where he has appointed 3 of the 9 sitting justices (a result that the Founding Fathers likely neither envisioned nor intended). He will think that “his” justices owe him a debt of loyalty for having appointed them to a lifelong position. The justices will think otherwise. Every American who depends on the rule of law for the legitimacy of their job – including (current) Senate majority leader Mitch McConnell and all 9 of the Supreme Court justices – respects the rule of law more than the rule of man.

The day before Inauguration Day, the Supreme Court will rule in favor of Biden.

On Inauguration Day, Joe Biden will be sworn in as the 46th President of the United States. Due to the ongoing coronavirus/COVID-19 pandemic, the inauguration will not take place on the steps of the U.S. Capitol but instead at a private ceremony in the Supreme Court.

So in the epic battle of man vs. law, it will ultimately be the rule of law that takes down #45.

Trump will go down in history as the worst President of the United States.